Whenever someone mentioned “Parma”, what comes to mind is Parma ham (Prosciutto di Parma) and parmesan cheese (Parmigiano Reggiano cheese). Indeed, Parma, the Northern part of the region Emilia-Romagna, is well-known for its food and rich gastronomical tradition. Two of its specialties, Parmigiano Reggiano cheese and Prosciutto di Parma are both given Protected Designation of Origin (PDO) status, which is meant to recognize products that have been produced, processed and developed in a specific geographical area, using the recognized know-how of local producers and ingredients from the region concerned. Parma is the first Italian city to be rewarded by UNESCO for its gastronomy, and has been officially proclaimed by UNESCO as a “Creative City for gastronomy”.

What is Parma famous for?

Yet beyond its gastronomical fames, Parma is also synonymous with its rich history and arts. It is famed for its University of Parma, one of the oldest universities in the world.

One of the most famous resident of Parma is Maria Luigia of Habsburg, Napoleon’s second wife, Empress of the French from 1810 until Napoleon’s abdication in 1814. During her governance, she implemented an intense programme of civic works aimed at transforming Parma into a centre of culture and civilisation.

Nominated as 2020’s Italian Capital of Culture, Parma showcases masterpiece monuments and “Parma yellow” buildings. Parma has gone through histories of wars and cultural legacies from the BC eras, through the middle ages to the contemporary age, apparent today through its medieval monuments and masterful architectures.

The artistic and elegant aura of Parma is evident in this historical city. There are artistic sculptures everywhere in sight, each comes with a QR code to an informative website you can access through a mobile phone. Within the city, there are many outdoor areas where people can chill and relax among lush green parks. Churches, palaces, museums dot this little European city, all within walking distance. People are friendly and unassuming, exuding an air of relaxed calm. As I wandered through on a half-day trip, the day seems to have slowed down in the city, yet there are so many sights to admire and the half day I had was simply not sufficient.

According to the Numbeo website, the crime rate in Parma is really low, which I think is partly due to the fact it’s a university city. I traveled there solo and had no issues wandering around, of course that was during the day time.

What to do in Parma Italy?

With just half a day to spare, I focused on the historical centre of Parma which is sectioned into three main parts:

There are so many places of interests, museums, monuments to visit, honestly half a day is too short. These are the places I personally visited and would like to say they are all well worth a visit and I’d like to revisit Parma another day to spend more time there.

Monumento alla Vittoria – This winged monument is the Greek goddess Nike, signifying “the one who gives victory” in war but also in peaceful competitions.

Monumento a Giuseppe Verdi – This is part of a larger monument which most parts were destroyed in 1944 during WWII bombing. It’s a tribute to composer Giuseppe Verdi for his contribution of his music expressed in Liric opera.

Monumento al Partigiano – Dedicated to depict the three aspects of war and resistance, of a fighter with the machine gun in hand, a fallen partisan and a shooting wall, made from brick houses of Parmigian homes destroyed by the bombings of 1944.

Monumento al Parmigianino – Girolamo Francesco Maria Mazzola, known as Parmigianino, was born in Parma in 1503. Despite the name association to the word ‘Parmigiano’ which some may relate that to the ham and cheese, this figure is a trained artist who has done remarkable works for churches.

Giuseppe Garibaldi Monument – Garibaldi was one of the heroes of the Italian Risorgimento and dedicated his life to fighting for the unity and independence of Italy.

From Google Maps, the whole area that shows the monastery is in fact no more in existence as the old monastery is now managed by the Parma commune.

A gated entrance with a rather long pavement leads to this chamber. I paid 5 Euro for entrance to a somewhat small couple of rooms of the former abbess’s apartments in a 16th-century Benedictine convent.

According to one of the local guide, the lady mentioned that this former abbess, the head of a group of nuns was rather influential, having occupied the large building with a few other nuns and was able to commission artworks done within the apartments. This abbess is Abbess Giovanna Piacenza, who commissioned Correggio to decorate the domed ceiling of her private room. According to Wikipedia, this convent mainly admitted women from aristocratic or wealthy lineage.

Right behind the Camera di San Paolo e Cella di Santa Caterina inside the now defunct monastery, you can find the Puppets Castle, also known as the Giordano Ferrari museum. Entry is free and this museum is said to be the most important collection in Italy dedicated to the animation theatre with more than 2800 pieces, between puppets, marionettes, heads, 600+ stage objects, scenery, pictures and posters, 400+ scripts (more of them manuscripts), a library about figurative theatre and paper archives.

It’s indeed an eye opener to the display of these really ancient puppets, yet somewhat eerie in ancient chambers. Imagine a group of Anabel-like (from the Anabel movie) dolls and puppets in display cabinets.

What used to be a wing of the monastery is now converted to a quaint art gallery, showcasing over 300 paintings & sculptures from artists such as Bernardo Daddi, Paolo di Giovanni Fei, Giovanni Gaibazzi. Entry was free and the entrance is this really narrow pathway next to a church-like building. From the gallery, you can have a glimpse into the inner sections of the monastery which now looks deserted.

This is one of the best art gallery I’ve visited so far, well worth the time spent in there. Among all the artworks, one that really strikes me is the painting of a lady in white dress, sitting in front of a lily pond, you have to see in person the impressive contrast the artist made of the lighting.

Near the main square, facing the Monumento al Parmigianino is the Shrine of Santa Maria della Steccata (Chiesa della Steccata), the headquarters of the Sacred Military Constantinian Order of Saint George. This church of both the Renaissance and Baroque styles, the Greek-cross design displays a solid and elegant exterior in stark contrast with the masterful artistic displays inside. The famed artist Parmigianino has worked extensively on the frescoes here.

A church built in the 1500s due to a vow made by the citizens during a plague epidemic. This is a church I chanced upon after leaving the Sanctuary of Santa Maria and towards the Piazza Duomo. You might see a couple more smaller churches like these where the exterior looks pretty normal but the interior is really beautiful.

This church shows up on Google Maps and is described as a significant example of Baroque Parma, built by architect Adalberto Dalla Nave in 1700s. It’s permanently closed now according to a local, open only for exhibits and events every now and then. I was advised to check with local tourism office on the event calendar when this church will open. Apparently it is linked to a pharmacy called Antica Farmacia San Filippo Neri, which on normal days is also not accessible to the public.

Located in the Bishop’s Palace on Piazza Duomo, the museum is a surprisingly small one. The ticket price of 12 euro includes ticket to the baptistery. It occupies part of the underground level of the Palace and the museum displays a chronological itinerary based of the history of the spread of Christianity in the town, starting from Roman times to the early medieval and medieval times.

This cathedral, dedicated to the Virgin Mary, is a landmark Romanesque cathedral of Parma with a stunning interior of frescoed walls and ceilings, and its dome frescoed by famed artist, Correggio. It was destroyed by an earthquake in 1100s, rebuilt and completed in the 12th century. Next to it is a tall bell tower and side chapels that were added later.

The exterior speaks of an octagonal medieval structure made of blocks of pink Verona marble. The interior boasts of stunning art and a highly frescoed cupola. That said, the Baptistery is in fact quite a small structure to spend time in.

If you are planning to visit Parma, check out the places I saved on Google Maps here.

I spend half my time in Italy, traveling to discover the old world charms in non-mainstream cities. Check out my posts on other UNESCO World Heritage Sites: Assisi, Mantova. 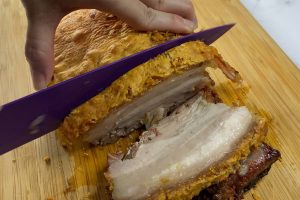