Ngoh Hiang, a Chinese pork roll dish, also known as Loh Bak or Asian Pork Sausage or Pork Spring Roll is a typical dish in Asia. Even in The Philippines, there is a similar version called ngohiong or ngo-yong, which is a deep-fried, battered rice-paper roll that is made of jicama, bamboo shoots, pork, shrimps, garlic, and onions. In Singapore, its Chinese name is 五香, which means five spices. It probably got its name from the Chinese five spice powder which gives the dish its unique flavour. You can find this dish in local hawker centres, fresh market food stalls, restaurants, it’s almost something as common as rice in the local food scene in Singapore.

In most homes, ngoh hiang is made during the festivities and especially during Chinese New Year. I have tried many different versions made by my aunties and friends’ mums, they all taste very delicious, yet slightly different. The ingredients might differ households to households and among different dialect groups, the one that I love is the version made with water chestnuts as it brings some crunchiness to the minced meat, as well as ultra crispy exterior which is made of tofu skin. It’s eaten as an appetizer, or a snack, and it’s usually prepared in advanced, chilled in the fridge, before pan frying to serve.

How To Make Ngoh Hiang

This dish is basically made with minced pork meat seasoned with five-spice powder. Different recipes call for adding either shrimp or fish paste, onions, water chestnuts, carrots, or other vegetables, before wrapping it in dried bean curd sheets into a spring roll shape. The cooking method is usually to steam, before pan frying or deep frying it. As the process of making it can quite long, it makes sense to make a batch, steam it then save it in the fridge, and then fry it before serving.

This ngoh hiang recipe I’ve tried using just my Ninja Max XL Air Fryer, it tastes just as good as the steam and fry version. I’ve also kept the extra ones I made in the fridge and air fry it again the next day, it’s super yummy still.

Your might also like to check out my Nonya Achar recipe, something that we always eat as part of the starter on our dining table. You can cut the dry bean sheets into small sheets and make smaller ngoh hiang. You can add vegetables such as onions, carrots to substitute with water chestnuts.  Instead of air fry, you can steam for about 10-15 minutes, brush some oil on the steaming tray before steaming. Store in freezer or chiller. To serve, simply pan fry with some oil or air fry for about 12 minutes over 180 degree celsius. 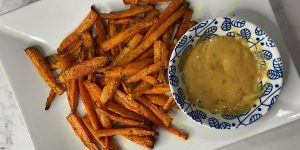